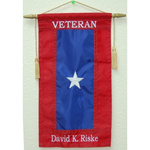 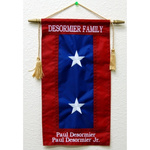 About the Veterans Service Flag

The Veterans Service flag is a derivative of the U. S. Service Flag.

After the United States became engaged in the war against terrorism, the Service flag's popularity rebounded.  Families across the nation began displaying the Service flag again to honor and recognize their spouses, parents, siblings or children serving in the Armed Forces.

The concept of the Veterans Service flag is the same as the Service flag with distinct and original symbolic modifications to clearly distinguish between those who are actively serving during a current conflict, and those who served previously in the Armed Forces - during a conflict or not.

In keeping with the symbolism of the American Flag, the colors of the Veterans Service flag symbolize the following:

How to Display The Veterans Service Flag

The Veterans Service Flag is an indoor flag and should be flown facing out from the front window of the home or organization, or hanging on an inside wall of a home or office as a decoration and tribute to the Veteran.  The era, conflict, branch of service and name of veteran may also be displayed to personalize the tribute.

Our Nylon Service Flags are made with panels stitched together with stars and lettering embroidered on to the nylon fabric. Fading:  These are more fade resistant than the traditional wool felt Service Flag, but will in time begin to fade as a result of constant exposure to sunlight.  This is a better choice if the window you will display your flag will be exposed to direct sunlight.

Service Flags are 8 inches in width X 15.2 inches long. Each flag includes a chainette tassel and gold cord, suction cup, pamphlet & 30 day no-hassle warranty.  They are indoor display (from a window facing out or other indoor location).  Your satisfaction is guaranteed or your money back.   Interested in starting your own Blue Star Mother's chapter or joining an existing one?  Click here: http://www.bluestarmothers.org/

1st Line of text at Bottom (text not required)

2nd Line of Text at the Bottom (text not required)

ServiceFlags.com, Inc. has a highly developed production and shipping system and we make every effort to ship your order in a fast and effecient manner.

Your cart is empty

The system is reducing the number of colors in this design so it can be used by the selected decoration process.

Please wait as your item is saved.

In order to use a design you must have the full rights to it. If you are unsure or have any doubts, please confirm your ownership or seek permission from the copyright owner.

When you save a design, you are agreeing to the following terms:

You will be redirected to a page where you can request a quote for this blank product. Any decorations you have added to this product will be removed.

How many colors are in this design?

You now have multiple elements making up this screenprint design

Select the colors that appear in your design.

You need to specify the total number of unique colors used across all the elements in your design.

This helps us determine the pricing based on the number of colors in your design.

You can also specify the colors used in your design eg "Red", "Blue", "pantone 1809".
If you dont tell us, our professional designer will work it out for you.

How many colors are in this design?

How many colors in your design?

Select the colors to be used

Start New Design
Check out
Back

You have already used screen printing in this order. To avoid additional screen costs you can re-use an existing screen print design for this product.

Your layout contains images that have been resized to the point where they may appear blurred.

Your layout contains images that appear outside the design area.

You cannot save the product until you have moved the images within the design area.

Your layout contains images that appear outside the design area.

By clicking OK, you are agreeing to accept the final product regardless of image quality. Click Cancel if you want to go back and fix the images.

You cannot save the product until you have moved the images so they are not overlapping.

Blank product purchase is not allowed

You will not be able to purchase this product until you add a decoration design.

Inactive blank product in use

You will not be able to purchase this item until you have increased the quantity.

By clicking OK, you are agreeing to accept the final product regardless of image quality. Click Cancel if you want to go back and fix the images.